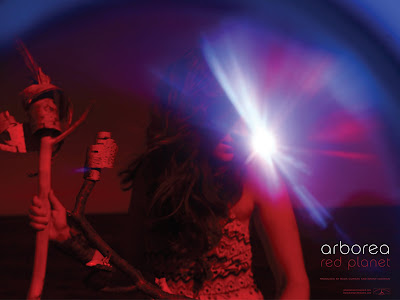 This husband-and-wife duo plays a trance-folk that, at every turn in the slipstream, seems to hail from another country: the murder ballads of Appalachia; the plucked-string stasis and Om drone of New York minimalism; the iridescent-Middle East imagination of the Incredible String Band. Singer Shanti and guitarist Buck Curran take Tim Buckley's "Phantasmagoria in Two" at a compelling near-standstill pace; their own "Wolves" is a long circular hush streaked with crying fuzz. Another primary instrument here: the soft oceans of reverb that cushion every minute of this stark and tender balladry.
~David Fricke/Rolling Stone 23 December 2011
Posted by Arborea Music at 10:00 AM